When reading a Engineering drawing, one needs to communicate how the different views was taken from a three dimensional (3D) object. I have found a easy way to show students how projection is done and never make them forget it again!

It is very important that the projection method that was used is indicated on the drawing, as it will eliminate any confusion when interpreting how a component or part should be assembled or manufactured.

Imagine yourself as looking at a box with the drawing paper in the background. We will divide what you see into 3 different layers. The box, the ink on the paper and then the paper. If the paper is fixed and cannot move and you want to rotate the box, the box will pivot on the paper at the end where it is rotated to.

The left and right views works in a similar way. When you want to see the left side of the box, you would pivot the box to the right with the right edge (that is on the paper) as the pivot point, showing the left view on the right hand side of the original view. The same rule applies to the right view. 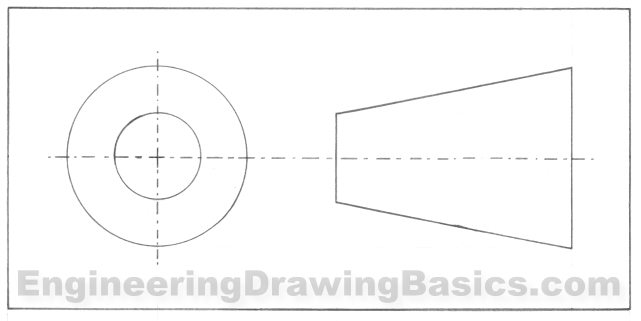 We will now be working on the same principle as with the first angled projection, but now the box will not be on the first layer, but on the third. So in your view, you will see the ink first, then the paper and THIRD, you will see the box. (imagine you can see through the paper)

Where the box and paper meets will still be the plane where the box pivots, but you will see the difference it makes in the projection!

The exact same principle works for the bottom, right and left views.

Indicating the Projection method on the Engineering Drawing

You should indicate the type of projection that was used to create the engineering drawing on every drawing you make. Indicating this on the drawing is done by means of a small projection symbol. This should preferably placed at the left bottom of the drawing where it is visible.

Both types of projections should NEVER be used simultaneously on a drawing or set of drawings. Most companies has a strict rule (and is normally noted in a specification) that only one of the projection types  may be used.

Always be very attentive when projecting different views on a drawing, as an incorrect use of the projection type can cause a wrong interpretation of the part that needs to be manufactured, which in turn can lead to re-work.

I found it very useful to sit with something and rotate it in different ways and naming the sides to fully understand the different types of projection.

Hi, I'm Piet and has been a Mechanical Draftsman in the Petrochemical environment since 2008. I want to share my experience and also hear from you. Together we can become better draftsman that add more value to our clients.

Please contact me if you have anything specific you need help with.
We use cookies to ensure that we give you the best experience on our website. If you continue to use this site we will assume that you are happy with it.OkRefuse
Revoke cookies